I tend to do things in large groups or just large in general. In this I mean almost all things. From dinner to building my jewelry. Almost everything is somehow 'over the top'. I always attributed doing stuff this way to having a big personality... a leonine one.

For a good period of time, I enjoyed writing on this here blog, conveniently and simultaneously, my insomnia was chronic.  My mind  constantly wandered and rarely shut down when I wanted it to. I liken it to a  a sweet little pet hamster running on its wheel all the time. As a temporary solution to that ridiculously evasive sleep, some of my regular physical exercise included wrestling with bedtime blankets, creeping out of my nest of coziness and scrabbling together some of my random thoughts.
An ability to corral this series of considerations,
into some cohesive text could make sleep a lovely by-product.
(not sure if that word is one, two or hyphenated... but i am less caring about rules of grammar and spelling at this moment).

With the advent of an uncomfortable visitor to my blog and other people who were reading it, I decided to take some time off from writing in it.
It made me uncomfortable to offer up personal ammunition to the universe, with which  could be irritated. Luckily for me, my sleeping has improved immensely. That and a ton of other little things have fallen into correct place. One remaining thing is that i missed though, was writing in this format.
It was helpful to document stuff, get tired enough to rest and perhaps put some of my thoughts into
a slightly more orderly format.

Something is always happening in my neighborhood.
Many of you know this from earlier documentation.
Tonight is no different.
What happened upset me a lot and right now, i feel like i may have calmed down some.
One of my next door neighbors experienced a theft, a break-in, a violation.
It is late in the evening and I have pieced the evidence together.
I feel guilty knowing about it, but the victim does not, not yet.
It is a simple story about her pet chicken.
I sometimes hear it scrabbling about on her porch next door.
Tonight i heard the sorta normal chickeny sounds, but at night. that is not the chicken's way.
There has been a ridiculous amount of noise about keeping chickens in the city.
As far as I have gotten with the absurdity of this as an urban problem, it is that
chickens are ok to be urban, but not roosters.
Apparently, they make too much noise and awaken people with their cock-a-doodle-doos.
The fella that lived next door was kind of small of build, white of feather and had a very charming sounding wake up call.
It was like an adolescent version of what I had thought it would be like.
I kind of thought I loved the rooster from afar. all of 2o feet or so.

Back to the point of the story... after the oddly timed chickeny sounds,
about an hour and a half later,  my dog took me for his nightly constitutional.
As we walked by, there was a pile of feathers on the porch.
There was also a large hole in the box that the chicken stayed in at night.
I guess one of the many, many feral cats that use the house across the street for home base, finally made a hole large enough to get into the box or the chicken out of it.
So in my rather large way, I am upset about this.
It is totally within the conventional laws of nature, but it is bothering me.
tomorrow I can possibly  catch my neighbor to ask her about this.
If she replaces what i am sure is a missing bird,
i will find a nice big box for the replacement bird to live in.
She needs one that is more kitty-proof.
i am too sad about this, and it was not even my own bird.
Also, by the time that I could ask her about the rooster, her porch had been swept clean and the feathers were gone. the box was gone. the entire issue had been removed.
That seems even sadder to me somehow.
That bird looked as happy as my neighbor all tucked up under her wing.
***
In other news, my kid's field hockey season is done.
Her team won the division II state championship.
She was awarded a brand new honor as the first D2 player of the year.
whooooo hooo!
I am very proud of her.
She has worked so hard for so long(we are speaking in team years here. something akin to dog years you know?) for this experience.
She has been planning all summer to get ready for the season, by weight training and running.
I know that she hates to run, but in preparation for the main season she did a lot of it.
I could not have been more skeptical of her commitment to this plan of action, but she made it all work for her.
Both of her field hockey and ice hockey seasons in are wrapped up for the year.
She has planned to go back to her weight training workouts.
I think it may be in prep for the LaX season.
She has no aspersions about that sport and says, she doesn't even like it.
Now going toward her 4th high school year playing, it is with skepticism that her statements are credible.
Either way, at this point, my hope is that she is keeping it all in perspective.
The LaX coach is not nearly as supportive or good to all the girls as the field hockey and ice hockey coaches have been.(she had been playing as the goaltender for the boys teams for the past two seasons).  If she winds up being picked on by the LaX coach again this year, it would make me so happy for her to walk away from that season.
It would make me seriously, even a bit happy.
This is the look of genuine joy and an appreciation for hard work paying off.

(just cannot get this to align properly dad-gummit, but, let's just pretend that i did?) 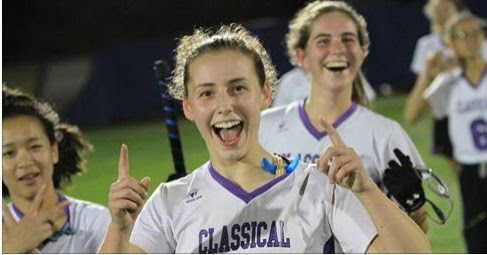 this is what i think happy looks like.
i could not be prouder or happier for her. she worked her butt off
to help put her team into the winner's circle.
final game, 5-0
two goals and one assist provided by the girl.
i hope she remains this happy all of her life... because she has worked really hard to and deserves it.

last week was halloween. ordinarily i am non-plussed by this holiday.
this year, i hit upon a fun way to participate in the festivities.
i made some day of the dead earrings.
i loved making them so much, that i have had a hard time stopping making them.
i have a fresh idea that may or may not replace the little girl heads... for non wicked holidays.

i made them in all sorts of colors and with all sorts of head gear upon them.
always with little floral contributions though. 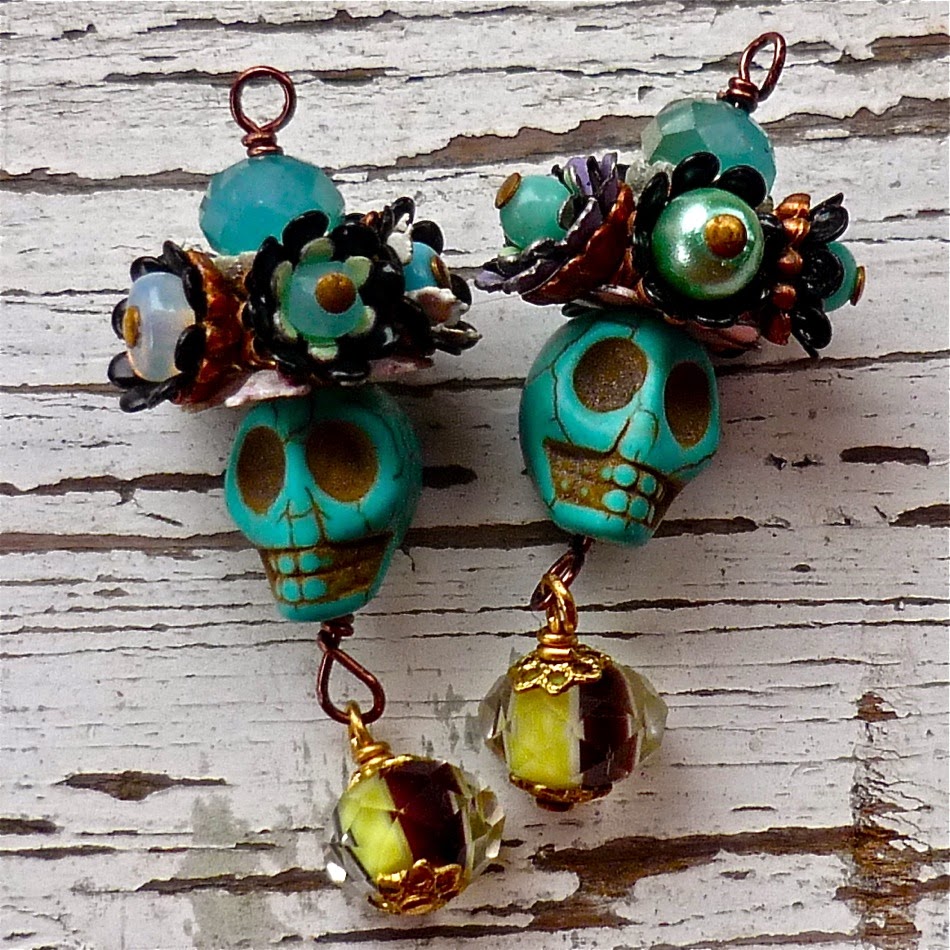 some wore hats with 'millinery' flair... 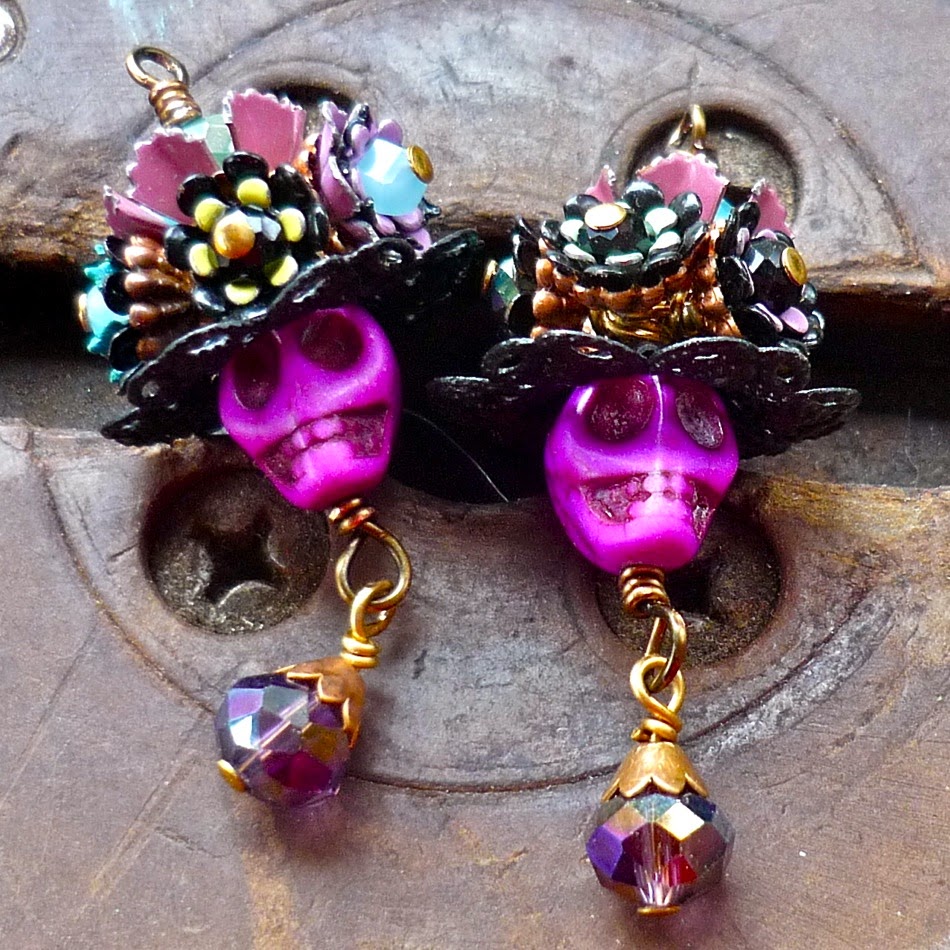 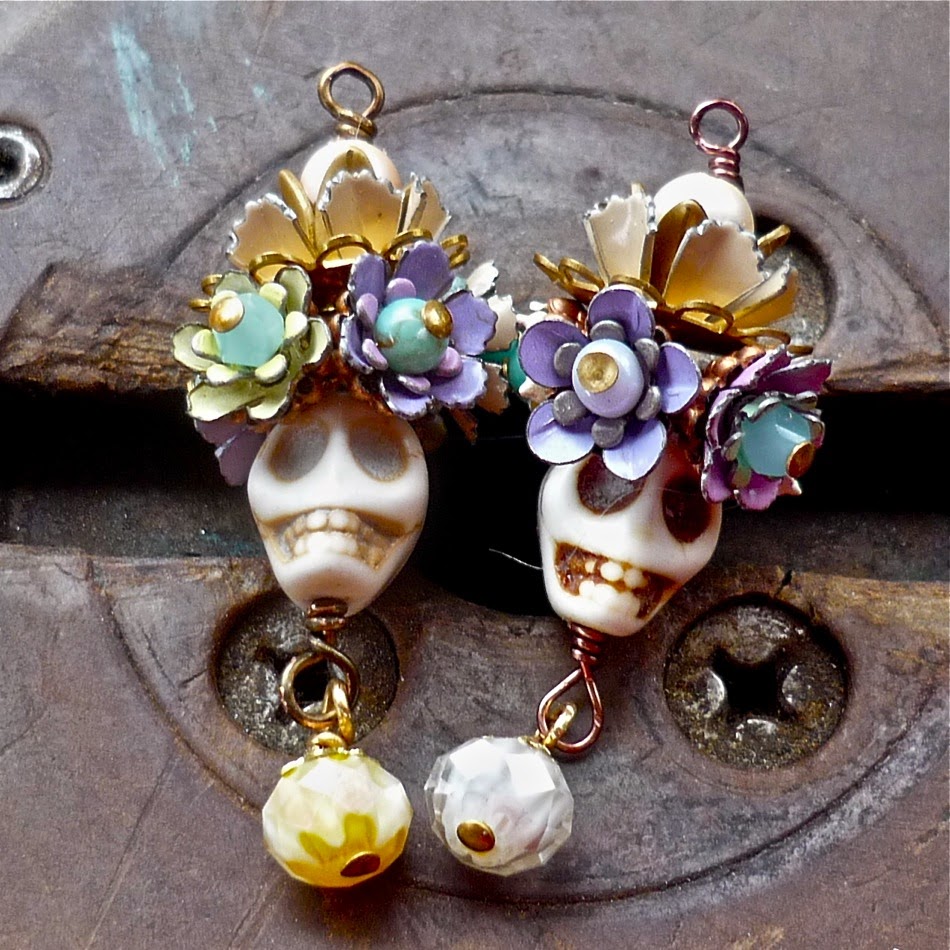 some had cute pointy multi-layered crowns... 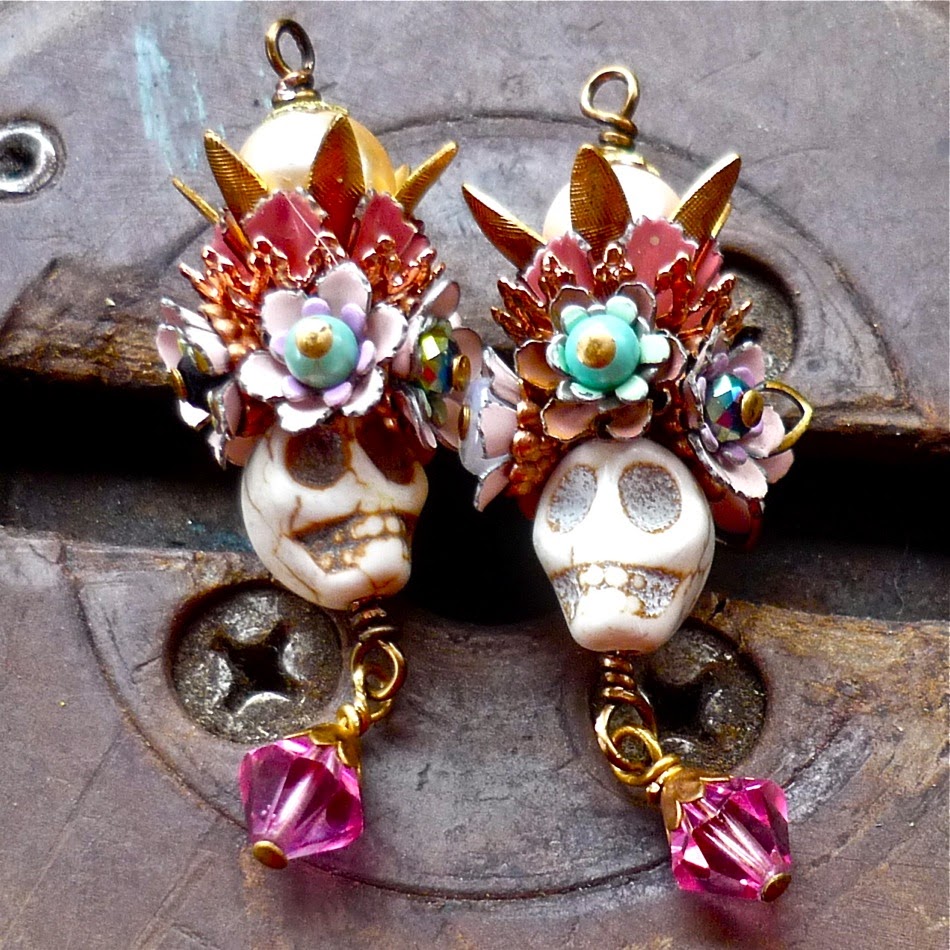 some were tinier than others... 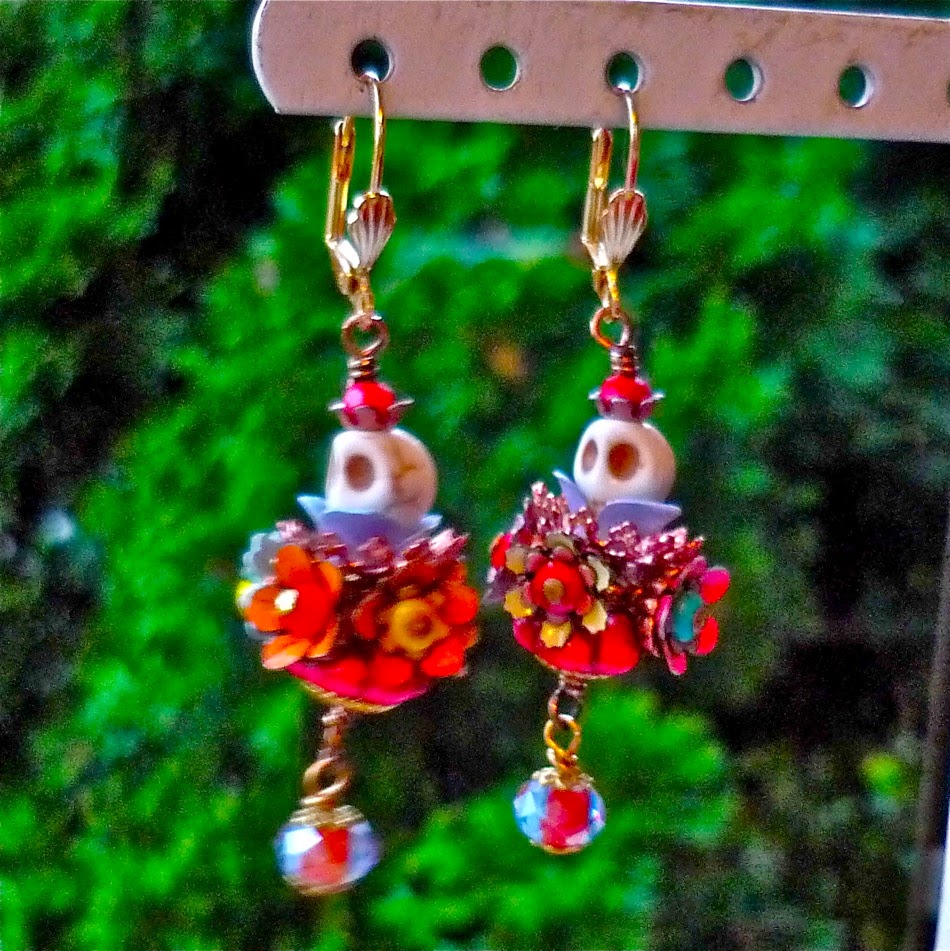 and others liked to do a can-can... 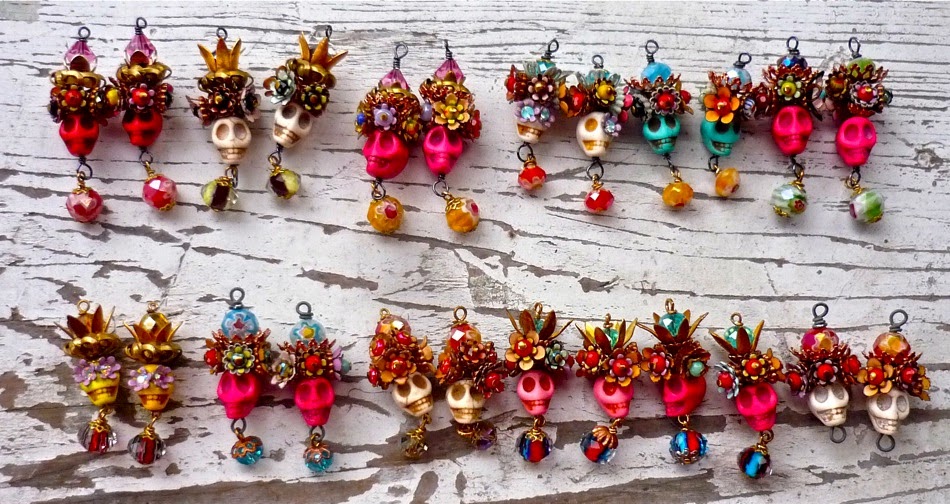 there were loads of the little skully ladies... and some even remain in my etsy shop right now.
i am considering leaving a steady exchange of these all year round.

as for other things???
well i will snap some pics tomorrow.
i look forward to the possibility of taking some photos outdoors in the natural light.
i can share those with you if i get there from here.

thanks for looking in... after such a long period of absence.